What are the new features in Vue.js 3?

Vue is a Progressive Javascript Framework, an open-source Model-View-ViewModel (MVVM) framework for building UI and single-page applications. The main focus of the core framework is on the view layer and it can be easily integrated with other libraries and projects. Single-Page Applications (SPA) can be easily handled using modern tools and supporting libraries. The new Vue.js 3.0 has a lot of enticing features. It is much smaller, and faster compared to the previous versions. Vue.js 3.0 is equipped with better TypeScript support and is more maintainable, and easier to target native. Let’s look at the new features of Vue.js 3.0. 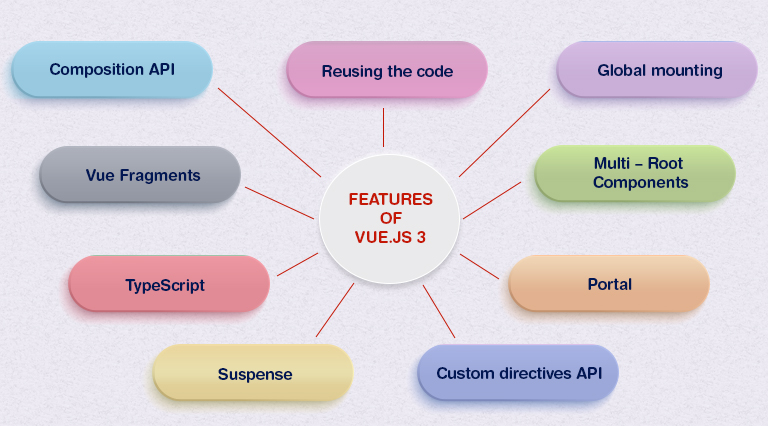 One of the highlights of Vue 3 is the composition API which was available in Vue 2 as a plugin. Currently, we use Options API to build components. But the problem is that it makes large components difficult to maintain and manage. The composition API can be defined as a set of additive, function-based APIs that admit the flexible composition of component logic". It makes it easier to organize and reuse the code better. One of the most significant changes is that, inspired by React Hooks, a new API that will allow a function-based way to write your component. It helps you to encapsulate logic into "composition functions" and reuse logic through components.

Vue 3 is fully compatible with the current syntax / the options-based API and doesn’t break anything in your Vue 2.x apps which is an advantage. Composition API could bring a lot more flexibility, scalability, and a better-structured code. Briefly, the two main advantages of Vue 3 are better organization and sharing/reusing of the code.

Code reuse is the key benefit of the new composition API. To share some code across other components, we only have mixins and scoped slots. But these two options have many drawbacks. In the case of mixins, it can be difficult to understand from which mixin a specific property was injected from and also it leads to name collisions with existing properties and functions. In the case of scoped slots, it is much easier to understand the code, but it can only be accessed in a template and it’s available only in the counter component scope.

Therefore, all these issues can be rectified with the help of composition API. We are not constrained by neither template nor component scope and what properties we can access from the counter. It's a good way of accessing libraries from third parties. For instance, instead of polluting the Vue prototype (this.$store), we can simply use the useStore feature if we wish to use Vuex.

Major change can be observed in the way we are instantiating and configuring our application. In the current version, we use the global Vue object to provide any configuration and create new Vue instances. Any modifications made to the Vue object will influence every Vue instance and component. In Vue 3, we can notice that every configuration is scoped to a particular Vue application defined with createApp. It will make the code easier to understand and less vulnerable to unintended issues caused by third parties addons. Currently, if a third-party implementation modifies the Vue object, the application will be influenced in unpredictable ways (particularly with global mixins), which with Vue 3 will not be possible.

Vue Fragment is one of the major highlights of Vue 3. Earlier, if we want to create a Vue component, it was difficult because of a single root node. But Vue 3 allows us to put many root elements in the template of our component.

Teleports or Portals are special components that allow us to render certain parts of code from one component to another component in a different DOM tree. It is also one of the features natively implemented in React. It helps in dealing with modals, pop ups, and the components which appear on the top of the page. You can be confident when using portals none of the host component CSS rules will affect the component that you want to display and relieves you from the nasty use of z-index. This feature was present in Vue 2 as a third-party library, but now it will be an inbuilt feature and can be used with the <Teleport> tag.

For now, Vue templates can have only one tag which means, a single root element. Even though we need two <p> tags as the sibling tags, we had to encompass them inside the <div> tag. But, this constraint is removed in Vue 3, and we don’t need to use the root element as we can use as many sibling tags as we want. All these tags can be used inside the <template> tag.

In the late Vue 2.0 releases, TypeScript was supported and the feature still continues in Vue 3. The Vue 3's source code is exclusively written in TypeScript, so the compositional API gets better support and it is optional. Along with these core features, some smaller improvements have been made. Those features available as third-party libraries are now incorporated in the core of the framework of the new Vue 3. The enticing features help to enhance the performance of Vue apps and offer a simpler and better developer experience.

Another best feature of Vue 3 is the suspense component that is highly inspired by React Suspense. Suspense provides an execution context or a boundary around the content it bundles up and waits for the component(s) wrapped inside to be ready before actually displaying them. It displays the fallback content by default that could be a text message, spinning animation, or any other type. The fallback content will be shown until the suspense component displays the component on the screen. Suspense makes use of the async setup () function and waits till the component is downloaded.

In Vue 3, the custom directives API can adjust slightly just to align better with the lifecycle of the components. For beginners, this update should make the API easier to understand and learn, as it is now more intuitive.

Vue 3 has hit the market with new features and a lot of smaller improvements. It is simpler with an intuitive API that is easy-to-use, straightforward, and efficient offering a better developer experience. It is appreciative that the Vue team incorporated many ideas that are currently available only via third-party libraries. Nextbrain Technologies is the best app development company in Bangalore offering tailored Vue.js solutions that fulfill your business dreams.